We generally use whole notes, half notes, quarter notes, eighth notes, 16th notes, etc.; each successive note is half of the previous one. But what happens when we want to divide a note into a number of parts other than a power of 2? Like if we want to split it into thirds or something? Well, we have a solution to that:

I think you may have zoned out for more than just a sec. But yeah, kinda. Tuplets are when you split a note into divisions other than 2. We've talked about triplets before, so let's review that:

I've seen this before.

No duh. It was four examples ago. I just copied it here. Anyway, it's the main rhythm of Mars from The Planets, as you can obviously see, but the interesting thing here is beat 1 of each measure: the triplet. These are eighth note triplets. What this notation means is each of those eighth notes is a third of a quarter note instead of half: in other words, 3 notes in the space of 2. Triplets are by far the most common tuplet. Here's how triplets sound:

Wait wait wait. What are those 6's doing there? Worse, what's the difference between the second beat of measure 6 and the third?

How do you count them?

Let's get back to your question about the 6's. The correct note to use in a tuplet is the next denomination up. So, if you want to put three notes in a quarter note, the denomination up from that is the eighth note. Tuplets generally (we'll get to the exception) fit more notes than usual. So usually you have two eighth notes in a quarter note; use a triplet and you can get three. There are four 16th notes, so the right note to use is the eighth note, of which there are only two. So it turns out that a 16th note triplet is the same as a 16th note sextuplet. You fit 3 16th note triplets in an eighth note, and you fit 6 16th note sextuplets in a quarter note. They're the same. Which you use is a matter of taste. So, in measure 6, beat 2 has the first two eighth notes turned into 16th notes, and beat 3 has the last two 16th notes turned into an eighth note. Potato, potato.

Of course, you can also have quintuplets, septuplets, nonuplets, decuplets, you name it. Quintuplets are usually harder to get right. Septuplets are pretty tricky to get right, but most of the time you don't actually need to be exact with them; there's some sort of run or whatever and you just start and end at the right time and that's what matters. Nonuplets aren't as difficult because they're just a triplet of triplets. Here are some basic examples: 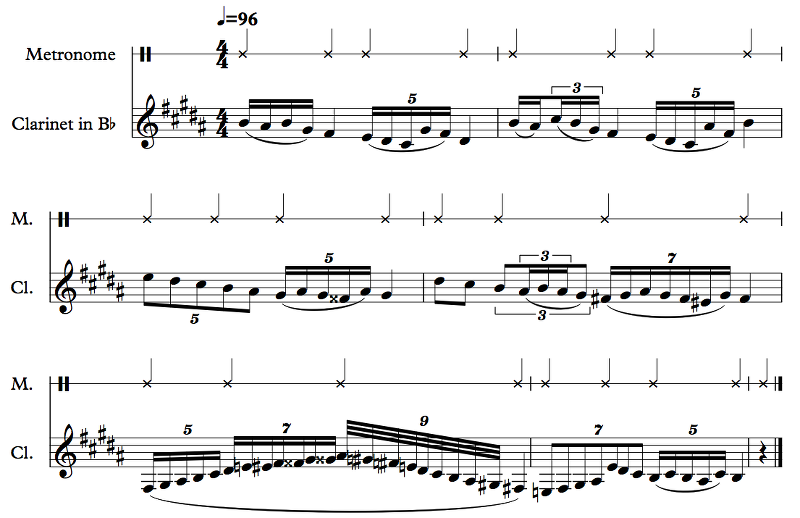 Let's start with what the fuck accidentals are those?

Hah, yeah. Measure 5, you see that Fx and that Gx in beat 2? I'll explain in a later chapter why they're useful in chromatic runs like this, but the problem is that in beat 3 I wanted to cancel them and use the F# and G# in the key signature. The traditional way to cancel a double accidental, for some reason, is to do a natural and a sharp (or flat, for a double flat). I'm not sure why. These days there's no reason to do this as it's fairly archaic, but you may come across it someday so there it is. The low G# and F# later in the measure are added by Sibelius automatically and they're cautionary accidentals; the previous accidentals don't actually affect those notes since they're in a different octave, but you might get confused and forget, so, hey, better to be safe!

OK, thanks. Now what the fuck is going on in beat 2 of measure 4?

Nested tuplets! I don't think I've ever actually seen them in music, but there's no reason why they can't exist, and in this case they're not even that tough to play (unlike the eighth note septuplets at measure 6). Obviously the 16th note triplets in that triplet take the space of one eighth note in that triplet.

Let's go through this example measure by measure. First, it's probably too hard, rhythmically, for you to sing or play through it. That's fine. I would probably never write this for a human player anyway. Eh, maybe I would. But even a professional would need to spend a while practicing these rhythms; luckily, the computer can play it easily. It's just a demonstration for you. So, measure 1, we have a contrast between 16th notes and quintuplets. Measure 2, we have a fairly common 5-note figure, two 16th notes and three 16th note triplets, contrasted with the even quintuplets. Measure 3, a demonstration of eighth note quintuplets. They're not actually that hard to get the hang of, but they don't come up often either. Measure 4, a demonstration of nested tuplets and a set of septuplets. Measure 5, a bunch of scalar and chromatic runs featuring nonuplets, and measure 6, eighth note septuplets just to mess you up (I'm sure someone out there can play those accurately, but it's sure as hell not me).

You keep talking about triplets... What happens in a time signature like 6/8? 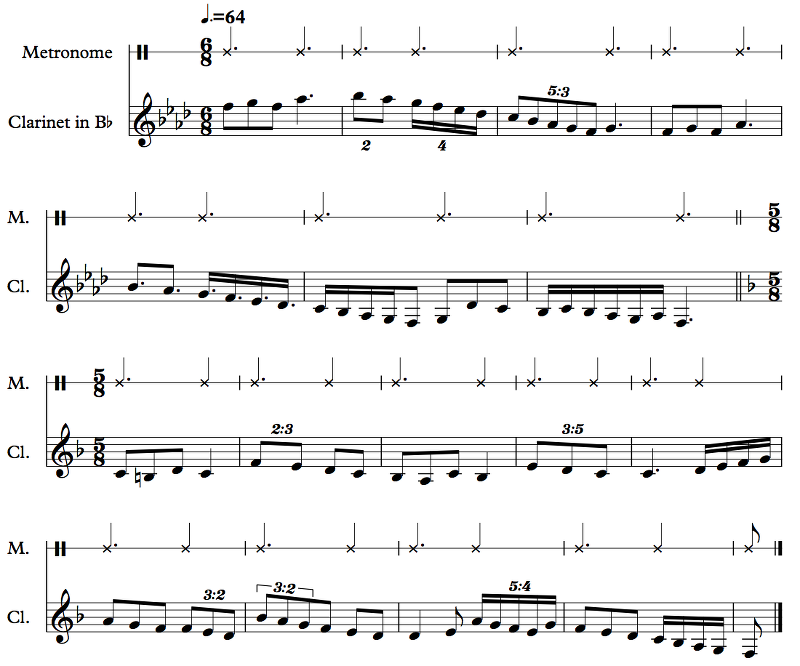 Yep. Let's start from the op. Measure 2, we have duplets and quadruplets. Remember what I said about going the next denomination up? Well... Yeah, I don't know either. The duplets are 2 in the space of 3. You may ask why they don't just write it like I did in measure 5. I don't know. I do it like in measure 5. I think duplets are inconsistent and stupid. But other composers like them. Same with the quadruplets. I think the dotted notes are just as easy to understand, if not more. The basic beat is a dotted quarter note, so why wouldn't you use a dotted eighth note for half of it, or a dotted 16th note for a fourth, etc.? (By the way, 6/8 does use dotted half notes, and 12/8 uses dotted whole notes too, as do 6/4 and 3/2.)

The interesting one is the ratio. You can read a ratio p:q as p notes in the space of q. So, in bar 3, you have 5 eighth notes in the space of 3, so it's a 5:3 tuplet. Note that regular tuplets like the duplet and the ordinary triplet have these guys implicitly, so in bar 2 of the 5/8 section, that's a duplet just like in bar 2 of the 6/8 section. The 3:2's are ordinary triplets, and the 5:4 is an ordinary set of quintuplets. The weird one here is the 3:5, 3 eighth notes in the space of 5. I think quarter notes make more sense, honestly, but you can't get an easy fraction using those (I'd have to do 6:5 with eighth notes and change them to quarter notes, but it's a triplet). It's kind of weird, but I've actually seen this in real music and it's a bitch to play (Albéniz's Arbola-pian, Zortzico; listen on YouTube for the triplets right around 3:07). The triplets are quarter note triplets, and there's no ratio marked, just the 3, but you can tell from context how it's supposed to go (since it's a 5/8 bar).

That piece does something even weirder, actually: two time signatures at the same time. It's fairly common, but it's oh so weird. The idea is that different parts are playing with different subdivisions. What Albéniz does is to have the right hand in 2/4 playing half notes while the left hand is in 5/8 doing the 5/8 stuff. The measures still line up; the 2/4 is in the same time as the 5/8. It's just that it's easier to notate half notes than to do dotted quarter notes tied to quarter notes. I wouldn't do this myself, but I'm not Albéniz. I've also seen a similar thing in Persichetti's Symphony No. 6, where in the third movement some people are in 2/4 while others are in 6/8. This is to avoid writing duplets and quadruplets in 6/8 (or triplets in 2/4). The conductor's beats are the quarter note in 2/4 and the dotted quarter in 6/8, so there's no trouble following.

How would they number the measures?

No, you're thinking of melisma.

Oh. What's that a disease of?

Eh. Sorry, that was a joke. Melisma is when a singer sings many notes while on the same syllable. The disease is melanoma.

A joke? Seriously? Dude, you suck at telling jokes.

This is getting obnoxious. Let's just get on with it. What the hell is hemiola?

There was a joke there. I forgot what it was. But the punchline was "timing".

Funny you should ask! See the Hemiola Metronome below:

The high notes are the metronome beats at the specified tempo, and the low notes are in the specified ratio. So if you set it to 4/3, there will be four of the low notes for every three of the high ones. You can start counting by listening for when they actually come together. I recommend tapping on the actual beats and singing (or saying "ta") on the notes you're trying to match against the beats. I should warn you, though, as fun as this is, you'll probably survive just fine without it. On the other hand, try mastering quintuplets while walking! If you're trying to do a pattern, try to assign pitches to the notes in the pattern to help you keep track of where you are.

I actually wrote a piece, Club Groove, where there's an instrument doing a low note on every beat in 4/4, another instrument doing a bass note on the quarter note quintuplet (5:4), and eventually another one doing a little melody on the quarter note septuplet (7:4). You can hear what a complete mess that is! Note that it's also a microtonal piece, meaning that it uses notes in between the notes on the piano (it's in 24-TET, specifically, if you know what that means).

I don't know what it means.

Hm, how to describe it without getting derailed... OK. You know how there are 12 notes in an octave? What if, between every two notes, we stuck in another note? So, like, between D and D# there's a D-half-sharp? That's 24-TET, which stands for 24-tone equal temperament. Some theorists don't really like this name and prefer to call it 24edo, or 24 equal divisions of the octave. I use the -TET out of habit; edo is probably more correct. We'll talk about microtonal intervals more in later chapters.

Before we move on from rhythms, let's talk about something important: